You are here: Home / News / The New Las Vegas

I just returned from my second trip to Las Vegas in 2010. This Vegas isn’t the Vegas I used to love.

The sandwich, a $20 or $50 sandwiched between your credit card and drivers license depending on length of stay, used to secure a decent upgrade from your friendly front-desk clerk. A hundy would put you in a near-rockstar suite. Now tips are banned for “Guest Service Agent” (GSA) and in place is a carefully metered up-sell chart, which garners the GSA a spiff, valued nowhere near what they could take in tips before.

Thankfully the practice can still gain upgrades in the luxury hotel market around the country – A $50 sandwich in Kansas City gained me a penthouse suite for Friday-Sunday stay this past fall – but I digress. 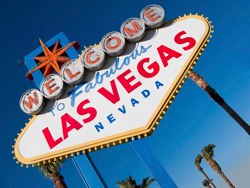 The city of sin has become the city of hand sanitizer as the transformation from a city of vice and debauchery has given way to a city of luxury – and faux luxury. Recent ratings from the Foodies has Las Vegas seated squarely in third place in the USA as a top culinary destination. Ranked behind New York and San Francisco.

Don’t get me wrong, I like food, I enjoy food, and I will go to great lengths to seek out culinary enjoyment. I think someone should do a ranking of celebrity and figure out where Chef ranks in the international pecking order of cool.

A celebrity chef has the power to flavor the food with psychology and desire, carefully measured with focus groups, marketing messages and repetition to serve a plate one thinks is above all others. Make no mistake, in order to be a top successful restauranteur, one must master the ability to improve margins; e.g. separate the diner from their cash. In the new Las Vegas, this jives well with the gambling mantra.

I will argue with those who tell me Las Vegas is a culinary destination. As far as food goes, it is simply a celebrity chef ego stroking affair, Bringing accessibility to the folks who eat up food television and its ever increasing ratings and spinoffs. Las Vegas’ third place ranking should emphasize that Las Vegas is ranked 3rd among those who use rankings to determine the value of their culinary intake.

My favorite menu item I saw: 10 oz Prime Filet Mignon (Nebraska) $56 (with a close second place to Proudly serving Omaha Steaks). Guess what, you won’t see a Nebraska cattleman paying $56 for a 10oz filet. In fact, if you see a Nebraska cattleman eating a steak other than one raised, butchered, and grilled locally, you won’t see him opening up his wallet for much more than about $15 and it damned well better come with sides. I live in Nebraska and can tell you that most local folks don’t bother with Omaha Steaks either.

And while the price of food has increased astronomically, the trend hasn’t been lost on the beverage side of the house. Wine is a whole different ball game and worthy of a different post. Where on God’s green earth is a pour of Absolut with a measure of Red Bull worth $14.50 and a 12 oz. Corona worth $7.50? Ding, ding. Las Vegas.

Good luck getting a cocktail waitress when you are gambling. Where free drinks used to rule the day, cocktail waitresses are few and far between these days. Why? Two things, Psychology and The EconomyTM.

Remember the anecdote about the brilliant employee that determined if they reduced the number of olives in a jar by one they’d save gazillions of dollars? That happens in Las Vegas every single day and with The EconomyTM hurting the way it is, Corporate Las Vegas is tweaking every parameter in the Separate-You-From-Your-Cash algorithm. From 1995 to 2009, the time between free cocktail runs in the slot areas has increased from 14 minutes to 27 minutes. Why? discretionary income is down and visitor counts are down. Increasing time between cocktail runs serves several fronts, including reduced wait staff and increased play by those gambling in order to offset the reduction in gambling dollars.

I’m interested in seeing what happens when the economy recovers. New Las Vegas is already worried about visitor counts. A friend in the hotel business, who would find a hole in the desert to drop me in quicker than you can yell “blackjack” if I revealed which hotel, tells me the average non-convention stay has dropped from 3.1 nights to 1.6 nights over the last five years.

Short of sharing details in the manner of cliched What happens in Vegas, stays in Vegas, My Las Vegas included weekend trips with my buddies that consisted of a gambling stash, a plane flight out, and a the only concrete agenda item was to make it back to the airport before our return flight left. We didn’t book hotel rooms, we didn’t take luggage other than a carry-on bag. We either earned the comp room or obtaining a place to crash through luck, skill, womanizing and/or bribery.

I have my fingers crossed that Manufactured Las Vegas loses their grip on sanitized artificial reality and returns to its roots. Gambling, booze, and debauchery. Until then, my trips include a detour to the local grocery establishment – or ABC Stores! – to stock my own private hotel-room bar. Vegas, you are going to have to work harder to get my money than by relying on your focus groups.

*I don’t have public-attributable sources for my stats other conversations with people I know in the business. Take ’em with salt (and a lime wedge with tequila) if you want to quote them as fact.

Deal of the Week

Most Popular This Week